Parts of this map are seen at various times in the Gilgamesh story. So here's the full thing. 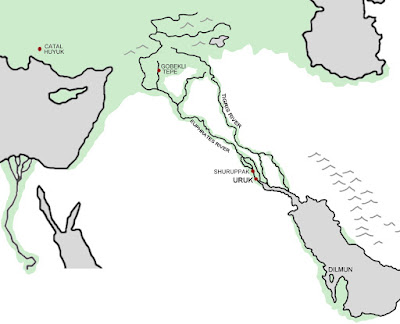 Note that in 2500 BC the climate in Anatolia (the northern part of the map) was much wetter. The forests of the Annunaki were far more impressive than they are today. And note that the northern part of the Persian Gulf extended much farther. but the drying of the region (and diverting the rivers for irrigation, draining marshes, etc.) means the sea no longer comes as far north.

And if you think I am making this up, here is a more detailed map of the middle section. From the excellent "Study of Mesopotamia" blog. 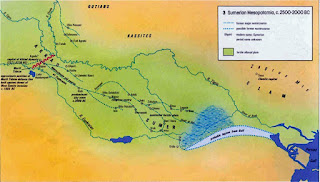 This illustrates why I chose Gilgamesh as the second story in the game. It has everything: real history, important mythology (a major source for Genesis!), the meaning of life, and a fun adventure with superheroes, sex, violence, epic quests, gods and monsters. All wrapped up in what is probably the most important book ever written. (Because it is the first major book, and the most influential one for the formative first two thousand years that mankind had writing. It makes the Bible look like late fan fiction.)

And of course Journey to the Center f the Earth was first because it's my favourite book, about the most important theme of all: amazing scientific possibilities might be just round the corner.
Posted by Chris Tolworthy at 23:23