Being faithful to the original books

This is the "do anything" game, so you can completely ignore the original story and go in any direction! If you think it would be cool if Gilgamesh met an alien and left on a flying saucer,then tell me what to write!

However, the core story does stick close to the original.

Look for pages ending with "00"

Do I change the original story?

I try to get to the choices in a story. Often I fill in gaps, and interpret, but I try not to change the story. Every time a book is adapted for a different medium it has to be interpreted. Let's say you are making  a movie. Even if you convert the book word for word, you add pictures. They might not be the pictures another reader imagines. And I often add scientific explanations, because I want to believe in these stories. Here are some examples:

Example 1: Journey to the Center of the Earth

Journey is pretty much as in the book. Except when the character faces a choice, I try to add what would happen if they made the other choice. Probably the biggest thing I interpret is the underground sea. The book says the cave is enormously and goes on for thousands of miles. I agree, but I take these as maximum numbers. In my pictures I add frequent pillars supporting the roof, that the book just forgot to mention. Because in real life a cave that big would need a lot of support or else it would collapse. I like to imagine it as real, so my cave must have pillars! 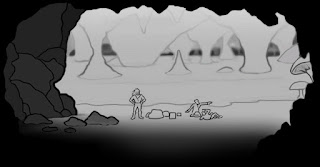 In my story the gods are human. The original text does not say they are human, but I think it works best if they are. In another example, in the original text, Shamhat is a temple prostitute (the word "samhat" meant "courtesan". People often focus on the prostitute part. But I think it makes more sense if we focus on the temple part., So I add several pages on what went on in ancient temples. I think this links very interestingly with Genesis, so I have a page on that as well. I don't change the story, but I give it a very particular interpretation.

Many scholars will have a different interpretation. But the bottom line is, this is a game, and it's about ideas. If I think an idea is interesting then I'll add it, and I don't worry too much if it isn't accurate in this world. It could be accurate if a few other things were discovered, and who knows, maybe they will be! This game is a "what if" world of possibilities, and that's what fiction is all about.

I need all the stories to fit together somehow. The easiest way to do that is to create scientific explanations for everything. They don't have to be detailed, but I just need to somehow connect everything to the physical world. That way I can connect every story without contradictions.

For example, I said that Anu (the sky god) was a human who was just an expert on the skies. Now you might want him to be a supernatural being. That's fine, I'm OK with that! But another story might have a totally different god as creator of the skies. I want as many connections as possible, so I will want them to be the same person. And I want to know exactly how Anu created the skies, so I can see how other stories could link to it.

Just saying "God did it" is not a story, it's a statement. But saying how he did it, and the struggles and conflicts he faced, and how how overcame his limitations, that is a story!

I hope my approach to a story is OK with you.. If it isn't, tell me how to do it better!
Posted by Chris Tolworthy at 16:50