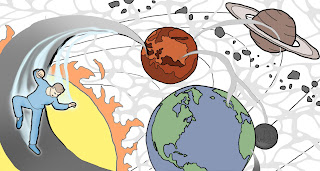 And this can only happen because the universe, being made of numbers, is infinite in all directions. There will always be interesting conflicts at the edges, and the edges expand forever.
Posted by Chris Tolworthy at 07:08 No comments: