The next 15 stories: my tribute to Jack Kirby

A few years ago (circa 2005 I think?) I posted on the Fantastic Four message board about my plans to create a homage to Jack Kirby's FF using classic novels. This is that homage. I think it is safe to talk about now, because there is nothing here that Marvel can sue me for:
For example, Reed Richards is the classic scientist-adventurer as seen in many Victorian science fiction novels, such as "From the Earth To The Moon". Dr Doom is the "evil" scientist such as in Guy Boothby's "Dr Nikola" or Jules Verne's "Master of the World".

The next year in TEDAgame

Issue 1: War of the Worlds: this is like the 1950s monster comics, where the word is currently in danger of invasion.Issues planned for the next year:

Issue 2: From the Earth to the Moon. Our heroes realise they need to invent space travel in order to defeat the Martians. This is like the start of Fantastic Four issue 1, where they race to get into space.

Issue 3: The First Men In The Moon. They reach the moon and discover that the real action takes place underground. This is like the Mole Man story.

Issue 4: Journey to the Centre of the Earth. This continues the Mole Man story. I already finished this story, but will need to edit it to fit as a continuation of issue 3.

Issue 5: The Goddess of Atvatabar. I was always intrigued by underground stories, so I go deeper! This is my homage to Kirby's "Kala, Queen of the Netherworld" who incidentally later appeared in the soft reboot of the FF after Kirby and Lee left (FF 126).

Issue 6: The Germ Growers (1892, Robert Potter): why can't we find the aliens, even underground? Because they are shape changers. This also explains the germs from issue 1, and  neatly links to the moon and subspace.

Issue 7: William Wilson (based on the short story by Edgar Allan Poe). This is about doppelgangers, and follows from the idea of a parallel society living underground (in the previous issue). This is my homage to FF 2. I add the alien angle because, ever since the War of the Worlds, I hint that god-like aliens are watching us, and in that context none of these stories are accidental.

Issue 8: The Realm of the Unreal (based on a short story by Ambrose Bierce, he of Devils Dictionary fame): about a stage hypnotist who can make you think you do and see things. This builds on the "we are being watched and controlled" paranoia, and is my homage to FF 3.

Issue 9: Life Is A Dream (based on a play about a king who is persuaded that something he really did, did not happen). This builds on the hypnosis theme, and also explains why historians ignore the War of the Worlds and the hollow Earth, even though (in my stories) they are real.

Issue 10: 20,000 Leagues Under The Sea: this links to the Goddess of Atvatabar (which began at sea) and the general search for the illuminati. It is of course my homage to FF 4. I may or may not add Verne's sequels at this point (In Search of the Castaways and Mysterious Island):

Issue 12: The Clock That Went Backwards (short story by Edward Page Mitchell: if anybody here likes H.G.Wells, Mitchell did it all first, and better, in my opinion) This is the natural join between the earlier themes (scientists who know more than you and me, stuff going on in history that we don't notice, and hypnosis) and the next theme of time travel.

Issue 13: The Time Machine: this is another story I already finished, but I think it fits best (With a little adapting) here.

Issue 14: Gilgamesh. I think this can follow from the Time Machine: because after visiting the future you want to visit the past.

Issues 15 and 16: Robur the Conqueror and Master of the World (Jules' Verne's story about a man who invents a world beating flying machine). This is my homage to FF 6. I will probably combine Dr Nikola and Robur into one. Captain Nemo is of course my homage to to the Sub-Mariner. The superhero aspects come in later as we move to the cosmic god stories.

This covers the first year: a story a month, plus the four stories I have already done that just need to be edited to fit. This timing is another homage to the FF, as the first six issues were bi-monthly, so they also took a year.

Period 7: the galaxy (precursors to FF7)

Issue 17: Voltaire's Micromegas (1752): we begin to learn about the wider universe. This is the start of my homage to FF 7.

Issue 18: Station X, by G. McLeod Winsor: more about the invasion and telepathy.

Issue 19: "Wireless" by Kipling: how this wireless telepathy connects people.

Coming next: travelling to worlds beyond the solar system

All of these plans are constantly under revision.

The first year is me finding my feet. The second year will be looking for feedback. Rome was not built in a day!

So now you know.
Posted by Chris Tolworthy at 15:28 No comments:

1: The War of The Worlds

This is the first issue! The origin story! It all starts here! From now on, TEDAgame will be a continuous story, with a cliffhanger ending each month. 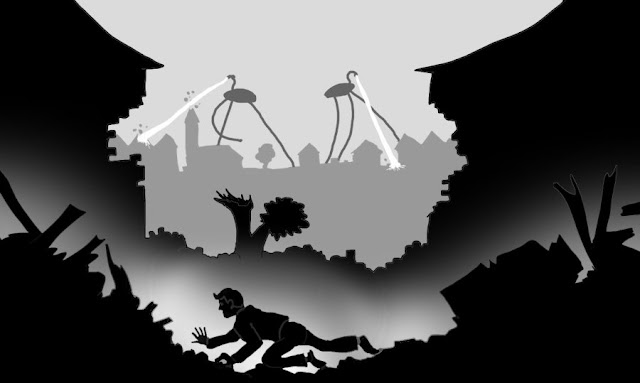 Over the next few months the existing stories will be adapted slightly so they fit into the continuous story. E.g. Journey to the Center of the Earth" will probably become episode 5. Gilgamesh will probably fit somewhere around episode 15.

I'm still developing the idea, but by this summer (June or so) each new story should come out reliably on the first of each month. This is basically a monthly comic, except you decide what happens, and you can add whatever you want. This is how all comics should be, in my opinion.
Posted by Chris Tolworthy at 03:59 3 comments: