2. From The Earth To The Moon 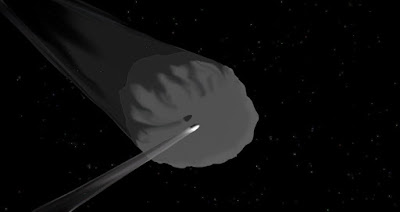 Why I don't advertise

This latest episode illustrates why I don't believe in advertising. Informing friends, yes. Making an easy to access blog, yes. Improving the product? Heck yes!! But shouting "this is great, look at this" to strangers? No! No! No!! Because this story, on the surface, has little to offer. What matters is the stuff you can't see... yet!

The latest release might seem to be evidence of a project in decline: it's the shortest, it's the most delayed, on the surface it's the least interesting story, certainly the least popular of the classic novels, and it's the first announcement to get zero likes on Facebook. :)  So advertising this would be an uphill struggle. It would also be disastrous for the game!

Imagine if I did what Facebook keeps asking me to do, and paid them money for advertising. Let's imagine that Facebook was somehow phenomenally successful, and thousands of people got to see this installment. Most of them would never come back. Because the game is like a hotel, and right now it's still a building site. I have a wall here, a part of the roof, and I'm still digging some foundations. If I invite people to stay in this hotel you an imagine the feedback I'd get! But I can see what they cannot: I can see the bigger picture. I can see where this is going, and what it will be one day. And I am very happy with its progress.

Like I said, from the outside the game seems to be in decline. Two years ago I was still trying to make this a 3D universe where every atom could be explored. One year ago I had revised my ambitions but was still trying to create an animated universe. Six months ago the game was launched as plain text and still images, many of them drawn in ten minutes or less. And since then the gap between installments has grown larger, with more apologies, and less to show. A game in decline, right? That's how it looks from outside. But let's pull aside the curtain and see what is happening behind the scenes.

A decline in ambition?

Since 1997, when I first began planning this, the idea has been the same: an endless game, biased toward big ideas, where the user can do anything. And that is finally what we have.

Great inventions involve numerous failed attempts before they get it right. When Swan invented the light bulb it took fifteen years of trying different ways. The final success, in 1875, depended largely on developments in technology. And so it is with TEDAgame: back in 1997 it was not practical for users to create their own stories, but now it is. And the game had to be designed for the desktop, but now it makes more sense to strip it back to basics for the busy user on the phone. I now have the game I always wanted: users can do anything. And unlike my earlier attempts, this is easy to make and share. Which means, unlike the previous attempts, this can work.

A decline in output?

When I am late with a story it's because I'm working on other projects. But these are all linked. The foundation of TEDAgame is the ideas: while I develop the stories I am also developing the underlying logic at the same time. The goal is for ideas that really make sense. This month for example I spent several weeks (of spare time) upgrading my AnswersAnswers site. I also spent time improving my Jack Kirby site, as TEDAgame is inspired by his work. It is also inspired by the game Zak McKracken. So, when I improve my Kirby Fantastic Four site, or my Zak site, this is all part of the same project. Remember: TEDAgame is not a superficial thing. It is only as strong as its underlying ideas, so sometimes I need to take time working on those.

As for being a slow month, if only you knew! (By the way, nobody has accused me of being slow, this blog post is simply my awareness that this is how it must look.)

This month I released From the Earth To The Moon. Tonight I hope to release a new, much improved front end to the game. In just ten days (the end of July) I hope to release a full length story, The First men In The Moon. At the same time I will upgrade the previously released Journey to the Center of the Earth and  Goddess of Atvatabar, so that episodes 1,2,3,4 and 5 work as a continuous cliff hanger adventure. And then I start work on episode 6, where we begin to find some answers!

You ain't seen nothin' yet.
Posted by Chris Tolworthy at 06:07